In the late 1950s, Cadillacs were sometimes sold with the slogan, “In a Realm all its own.” Cadillacs are often associated with mystery, imagination, elegance, luxury and power. Sort of like Steampunk, wouldn’t you say? 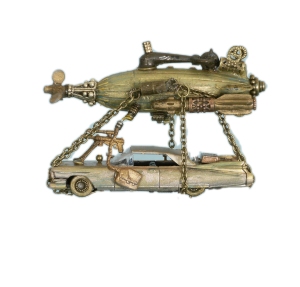 The Fleetwood, with its exaggerated tail-fins and over the top detailing epitomized the luxury car; you didn’t just run an errand in a Cadillac, you had an adventure.

Someone asked me why we see sailing ships suspended so often under steampunk fantasy airships — and rather than come up with a good answer, I drifted off and started thinking of other modes of transportation that might get the job done just as well or better than a sailing ship. Assuming we’ve created an entirely new power source for the grand airship (and we no longer need to depend on wind power for extra ooomph!), the new improved airship should be able to carry just about anything. Hey, I’ve seen Back to the Future more than once, and I know these things are possible.

I figure you could take a caddy, and fly it to the moon if you wanted. To the stars. What does make me wistful is wondering if I could see what happens when “Airship Cadillac” meets “Flight of the Warrior Rhino” — look out. That Rhino is just looking for a battle these days. There’s a story being written and I’m not there to witness the cliffhanger.

And you know what kind of airship I might work on next? An Airstream Trailer under a Zeppelin. A to Z, why not?

Airship Cadillac: One of a kind custom 5-inch snow globe (water globe) with tiny airship and gold 1957 Cadillac suspended below for the ride. When shaken, the liquid-filled interior shimmers with gold dust, giving the impression of a jump into hyper-speed. All designs and images Copyright (c) Camryn Forrest Designs, Denver, Colorado 2013.

HAVE A PLAN TO VOTE