I make snowglobes, or snow-less waterglobes, whichever you prefer. Since I’ve never used “snow” I make up my own terms.  Someone asked: how did you get into steampunk designed snowglobes?

It’s a chicken and egg, water and globe, spark and fire kind of question. I was making snowglobes and tiny sculptures before I’d ever heard of steampunk and steampunk art. I connected with the shapes, the colors, the materials and the essence of steampunk when I was introduced. (Thank you to John and Max, my big influences there. Without you, I’d lead a very sheltered life.)

A few of my globes are classically “steampunk” if there is such a thing: incorporating the watch parts, the repurposed components, the industrial bases with hardware embellishments. The use of a steampunk icon, such as an airship or zeppelin is a giveaway. Here are two clearly in that category: 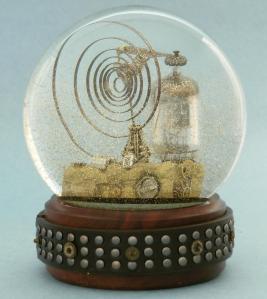 But I make other snowglobes that — while they may be appealing to some who like and live steampunk — are probably in a genre yet to be named.  The snowglobe “Point of View” with its Escher-like staircase and endless marching figures is one of those.  I make what I like, and what amuses me. Sometimes it feels “steampunk” and sometimes it’s pure fantasy, sometimes it’s just an emotion or visual balance that I find wistfully appealing. I’m working on another staircase piece now, but it uses impossibly tiny Mechwarrior-like Metal robots instead of people on the stairs. I have no idea what slot that will fit.

If a rose by any name would smell as sweet, then I can hope my waterglobes will appeal to some people, or not, regardless of the category or the name. I like going back and forth between styles and developing along parallel paths.

EARLY DAYS OF A BETTER NATION