It probably doesn’t make much sense on the surface, that I would correspond with members of the Sacramento Steampunk Society whom I had never met – living in Denver and all, as I do. But I had discovered this group when I was looking for steampunk events near where my family members live, and it was such an active and friendly group, I eavesdropped on their facebook page a while, and felt as though I knew these people. They seem to enjoy each other and have so many activities! If you live in northern California and like all things steampunk, I suggest you look them up.

Well, next thing you know, I’ve got a steampunk artshow in San Jose (and members of the SSS were quite involved in putting Clockwork Alchemy together). Then I read a comment by the effervescent Alexander Watt Babbage that set my creative energy on “high.” All he said was, it sure would be nice if we had a piece of steampunk art or sculpture at our group table at the Con.

Oh, I do love a challenge.

I felt my snowglobes (about 6″ tall and 4″ wide) were too small to make an impact on a busy table with buttons, brochures, ribbons and photos, but it occurred to me to make the base larger to give the snow globe more presence. I contacted the elusive snowglobe engineer (he who solves all problems snowgobe-related), and described what I wanted: a double base, supported with metal columns, and the snow globe riding above.

He produced this as a starting point: 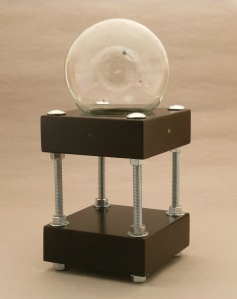 It was structurally perfect, but needed … something. I knew the support hardware would be new, but the shiny silver was jarring. As I was trying to figure out what to do to soften the color, possibly taping off some parts, and spray painting it matte gold, I happened serendipitously across a post and tutorial from Epbot, describing how to patina just about anything with the right layers of paint. 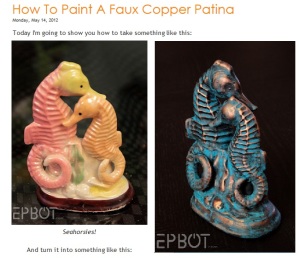 Epbot: How to Paint a Faux Copper Patina

So I tried it on shiny “fresh from the hardware store” silver bolts, using layers of hand-applied acrylics and the improvement to the supports was immediate. It looked great.

We used the Sacramento Steampunk Society’s logo and the SSS group photo inside the snowglobe (logo design courtesy Chance Von Bekke), added riveted leather straps with gears and timepieces, to work with the dark and mysterious logo, featuring a steampunk airship hovering over the California State Capitol. 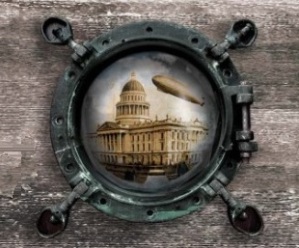 Next, we created a scene in the space between the upper and lower base, using tiny historical (with artistic liberties) figures. That scene includes a ray-gun-packing proper lady, a man relaxing in a time machine who looks suspiciously like Mr. Babbage in his Saturday cap, a traveler with a jetpack and a neo-Victorian couple conversing, both hiding weapons behind their backs. Here’s the finished piece, which also includes the Society’s motto on four separate brass plates wrapping each side of the base. Adding a jetpack to a figure just over 1-inch tall made me positively giddy. 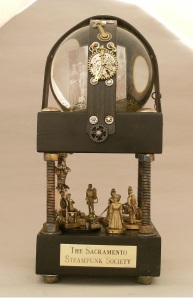 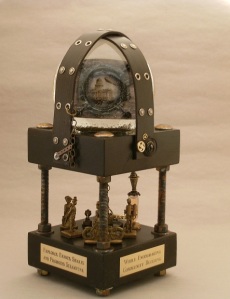 Here’s a close up of the scene in the space between the two base pieces. You can see the tiny jetpack, and if you look closely, there’s a Victrola playing as well.  (And note the nicely patina’d supports – Thanks again, Epbot!):

What was totally fun was to see how many times the globe itself appeared in people’s photos of the Society’s information table over a four-day Memorial weekend.  Sweet!

EARLY DAYS OF A BETTER NATION