We’ve been on the road a bit, and busy with family things, and in the studio working on new art for upcoming shows … and this blog has been a bit neglected.
To tide you over until the next time there’s a snow globe ready for its close-up, here’s a wonderful story from one of our local newspapers, “Life on Capitol Hill” in Denver.
Read all about it here.

The pair travels the country for art shows

Snow falls outside the window of Hilltop residents Cameron Lewis and Reid Grossnickle’s workshop. But there’s a bit of snow inside, too, in the confetti and glitter swirling in the collection of snow globes — some now decades old with yellowing water — that line shelves in the entrance of the pair’s packed workshop.

Many of the globes celebrated milestones of corporate companies, some no longer in existence.

Making snow globes was a career that unexpectedly landed in Grossnickle’s lap. He and Lewis originally made cubes with liquid and sculptures inside. The pair were at an art show in Las Vegas in the ‘90s when someone asked if the art could be set in globes instead.

So Grossnickle began making snow globes for companies. Lewis later explored the couple’s more artistic side with globes for art shows as well as their Etsy shop.

“I kept looking for snow globes that I imagined, and I couldn’t find any,” Lewis said. “There was nobody we could find making snow globes for grownup art.” 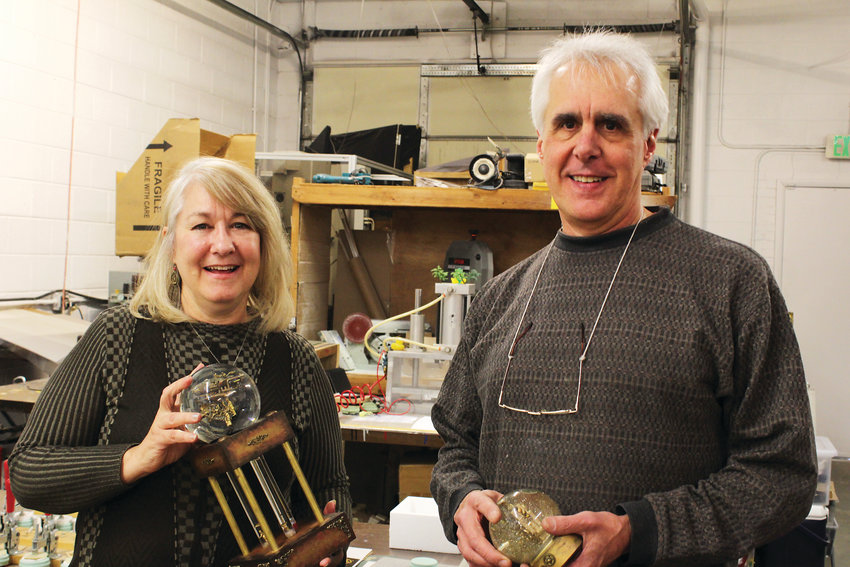 Cameron Lewis, left, and Reid Grossnickle stand in their workshop holding a few of
their snow globes. They create handmade works of art, with Lewis putting
together the pieces and Grossnickle creating the “snow” inside.
PHOTOS BY Kailyn Lamb

The magic happens at the back of the couple’s workshop in northeast Denver.

Grossnickle helps repair snow globes sent to the workshop, many of them collectibles or items with special family memories. But he also makes snow globes with people’s photos and for companies or universities that want bulk orders with each one looking exactly the same.

He is one of the few snow-globe makers in the U.S. making corporate products, Grossnickle said. Other companies are based in China and Taiwan. The pair don’t advertise or promote repairs on their website, but if people ask, Grossnickle will often take in customer’s broken globes. After repairing his first globe for a family who lost their mother to cancer, he couldn’t say no.

“When I fixed the one, Pandora’s Box got open, and the flood has just come in,” he said.

Lewis is in charge of the handmade creations — snow globes large and small inspired by trinkets or other objects she finds. She often stops on walks, picking up plastic pieces or items people consider trash.

“We still get inspired by what we experience,” she said.

Each globe contains its own little world. As a former architect, Grossnickle sometimes makes model stairs or other items to go in the globes. The largest ones are 5 inches in diameter. Often, Lewis sets those globes on stands that have vertical liquid tubes with glitter and confetti.

“Those are really fun because we’re pushing the envelope, how far can you push a snow globe,” Lewis said. “Either people get that or they don’t.”

The couple moved their workshop to northeast Denver after getting priced out of the River North neighborhood, where they worked for 30 years, they said. The workshop houses all the glitter and confetti for the globes, as well as the liquid solutions and glass. Creating snow globes can be as much a science as an art because of all the steps to ensure the confetti works in the liquid solution, Lewis said.

“Every glitter and confetti that we use has to be soaked for months,” Lewis said. “Otherwise, we dye all the liquid multi-colors.”

Although Lewis handles the business side of the artistic snow globes, making them is a collaborative effort. Once she finishes the sculpture on the inside, she passes it along to Grossnickle who picks out the color of the confetti. Some items float differently in the liquid, she added, and can take hours to descend to the bottom again. 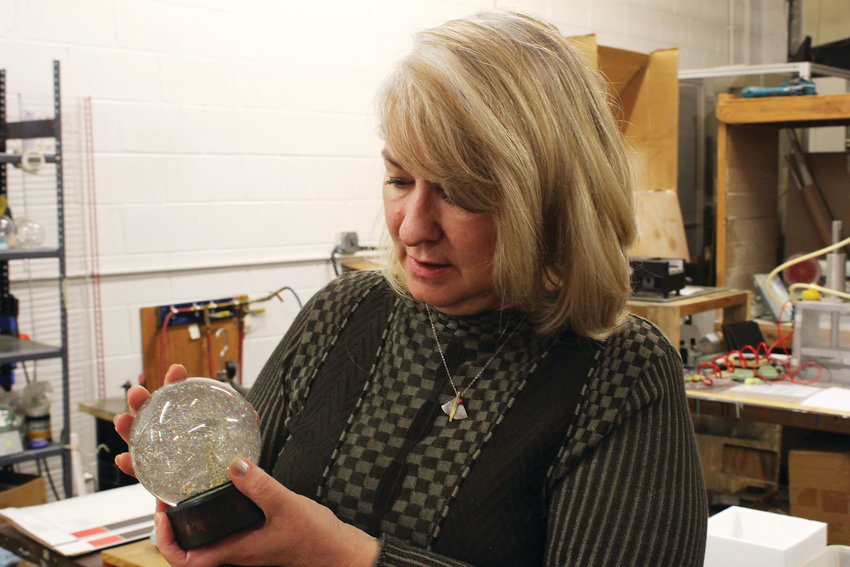 Cameron Lewis gently shakes one of the finished snow globes. She said that she and Reid spend months testing the glitter inside the snow globes to make
sure they work well in the liquid solution.
PHOTO by Kailyn Lamb

“Reid’s brilliant with the confetti and sparkles, and how to add things,” Lewis said. “Occasionally, he’ll do something where you shake it and the globe will go completely solid color.”

Completing a snow globe can take several months of careful and concentrated work.

Cameron Lewis said that she and Reid Grossnickle try to show their snow globes in art festivals around the country. But their artistic snow globes are not something that can be shipped. Instead, the couple gently packs up the globes and drives to shows across the country.

One of the first shows they participated in was the Cherry Creek Arts Festival, Lewis said. She called it “an astonishing first place to start.”

Lewis said she and Grossnickle will be in the Cherry Creeks Arts Festival again this year, which will be happening July 5-7. For more information, go to http://cherrycreekartsfestival.org/.

The couple’s festival schedule can be found on their website, https://camrynforrest.com/.

When they’re not traveling to shows, Cameron Lewis and Reid Grossnickle sell their snow globes on their Etsy shop, CamrynForrestDesigns. More information can also be found on their website, https://camrynforrest.com/.

Grossnickle’s site for custom snow globes and repairs is www.snowglobecentral.com.

When it comes to repairs and corporate snow globes, having the right glitter or confetti can make all the difference. Lewis said that when confetti companies started going out of business, she and Grossnickle would buy their inventory. This led to them owning tens of pounds of glitter.

“We have more confetti than Party City does,” she said.

But it’s worth it. When Grossnickle gets requests for repairs, even the smallest sample of the gitter inside the snow globe can help.

“When someone sends in a globe, there’s a really good chance that we’re going to be able to match what was in it,” Lewis said.

For more stories like this from “Life on Capitol Hill” and sister publications, please check out https://coloradocommunitymedia.com